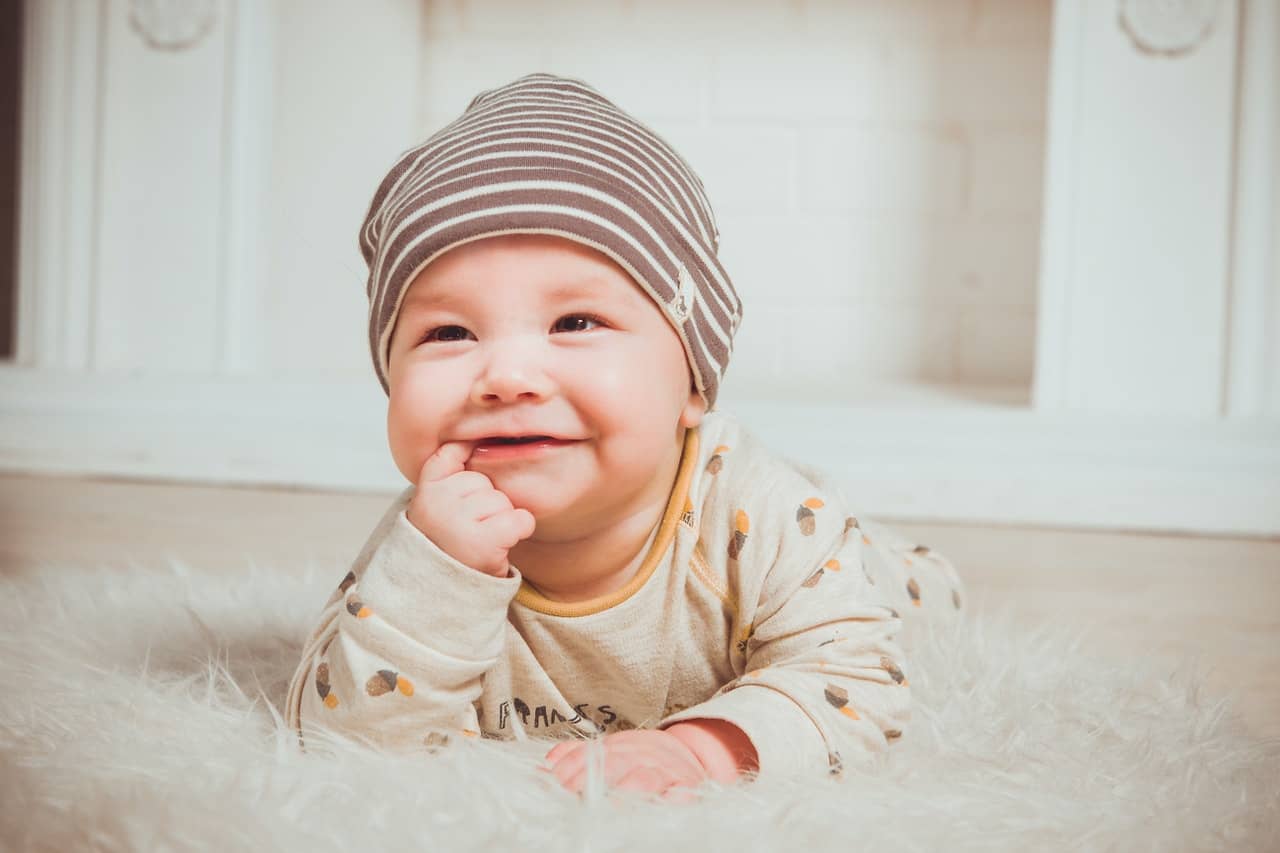 The time from birth until a child’s second birthday is a critically important period for proper growth and development.  During this period, nutrients critical for brain development and growth must be provided in adequate amounts.

Children in this age group consume small quantities of foods, so it is important to make every bite count.

Human milk feeding alone is the ideal form of nutrition from birth through about age 6 months. Human milk provides necessary nutrients, protective factors against disease, and other unique immunological benefits. If human milk is unavailable, infants should be fed an iron-fortified commercial infant formula. Once an infant is developmentally ready, foods and beverages should be introduced to complement human milk feeding.

These complementary foods and beverages are essential to meet the nutrient requirements of infants starting at about age 6 months and should be selected carefully to help meet these needs. As an infant becomes a toddler and learns to eat a variety of foods, flavours, and textures, the goal of complementary feeding becomes establishing a healthy dietary pattern and transitioning to a healthy family diet by age 2. 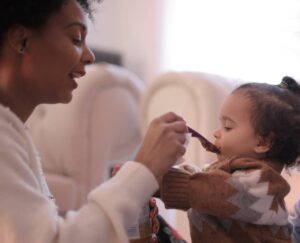 Feed Infants Human Milk For The First 6 Months, If Possible:

Exclusive human milk feeding is one of the best ways to start an infant off on the path of lifelong healthy nutrition. Exclusive human milk feeding, commonly referred to as exclusive breastfeeding, refers to an infant consuming only human milk, and not in combination with infant formula and/or complementary foods or beverages (including water), except for medications or vitamin and mineral supplementation.

Human milk can support an infant’s nutrient needs for about the first 6 months of life, except for vitamin D and potentially iron. In addition to nutrients, human milk includes bioactive substances and immunologic properties that support infant health and growth and development.

Proper Handling And storage of Human Milk and Infant Formula:

Introduce Infants to Nutrient- Dense-Complementary Foods at About 6 Months Old:

At about age 6 months, infants should be introduced to nutrient-dense, developmentally appropriate foods to complement human milk or infant formula feedings. Some infants may show developmental signs of readiness before age 6 months, but introducing complementary foods before age 4 months is not recommended. Waiting until after age 6months to introduce foods also is not recommended.

Potentially allergenic foods (e.g., peanuts, egg, cow milk products, tree nuts, wheat, crustacean shellfish, fish, and soy) should be introduced when other complementary foods are introduced to an infant’s diet. Introducing peanut-containing foods in the first year reduces the risk that an infant will develop a food allergy to peanuts.

Cow milk, as a beverage, should be introduced at age 12 months or later. No evidence delaying the introduction of allergenic foods, beyond when other complementary foods are introduced, helps to prevent food allergy.

Introduce Iron Rich Foods to Infants Starting at About 6 Months:

Iron-rich foods (e.g., meats and seafood rich in heme iron and iron-fortified infant cereals) are important components of the infant’s diet from age 6 through 11 months to maintain adequate iron status, which supports neurologic development and immune function. Infants are typically born with body stores of iron adequate for about the first 6 months of life, depending on gestational age, maternal iron status, and timing of umbilical cord clamping. By age 6 months, however, infants require an external source of iron apart from human milk. A complementary food source of iron beginning at about 6 months is particularly important for infants fed human milk because the iron content of human milk is low and maternal iron intake during lactation does not increase its content.

Infants receiving most of their milk feeds as iron-fortified infant formula are likely to need less iron from complementary foods beginning at 6 months of age. After age 12 months, children have a lower iron requirement, but good food sources of iron are still needed to maintain adequate iron status and prevent deficiency.

Introduce Zinc-rich Foods to Infants Starting at About 6 Months Old:

Zinc-rich complementary foods (e.g., meats, beans, zinc fortified infant cereals) are important from age 6 months onwards to support adequate zinc status, which supports growth and immune function. Although the zinc content of human milk is initially high and efficiently absorbed, the concentration declines over the first 6 months of lactation and is not affected by maternal zinc intake.

Encourage A Variety of Foods from All Food Groups to Infants Starting at About 6 Months Old:

To support nutrient adequacy, acceptance of healthy foods, it is important to encourage foods from all food groups. Because very young children are being exposed to new textures and flavours for the first time, it may take up to 8 to 10 exposures for an infant to accept a new type of food. A repeated offering of foods such as fruits and vegetables increases the likelihood of an infant accepting them. A nutrient-dense, diverse diet from age 6 through 23 months of life includes a variety of food sources from each food group. 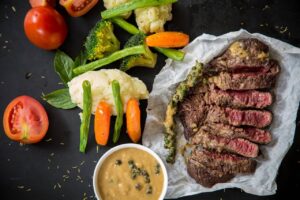 The long-chain polyunsaturated fatty acids, specifically the essential omega-3 and omega-6 fatty acids supplied through seafood, nuts, seeds, and oils, influence the infant’s fatty acid status and are among the key nutrients needed for the rapid brain development that occurs through the infant’s first 2 years of life. Some types of fish such as salmon and trout are also natural sources of vitamin D.

Vegetables and fruits, especially those rich in potassium, vitamin A, and vitamin C, should be offered to infants and toddlers age 6 through 23 months. The vegetable subgroup of beans, peas, and lentils also provides a good source of protein and dietary fibre. 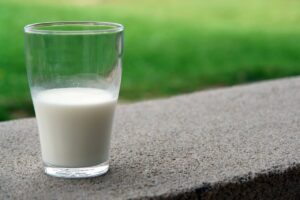 For dairy, families can introduce yogurt and cheese, including soy-based yogurt, before 12 months. However, infants should not consume cow milk, as a beverage, or fortified soy beverage, before age 12 months as a replacement for human milk or infant formula. In the second year of life, when calcium requirements increase, dairy products, including milk, yogurt, cheese, and fortified soy beverages and soy yogurt provide a good source of calcium. Vitamin D-fortified milk and soy beverages also provide a good source of vitamin D. For those younger than the age of 2, offer dairy products without added sugar.

Grains, including iron-fortified infant cereal, play an an important role in meeting nutrient needs during this life stage. Infant cereals fortified with iron include oat, barley, multigrain, and rice cereals. Rice cereal fortified with iron is a good source of nutrients for infants, but rice cereal shouldn’t be the only type of cereal given to infants. Offering young children’s whole grains more often than refined grains will increase dietary fibre as well as potassium intake during the second year of life and help young children establish healthy dietary practices.

Some dietary components should be limited:

For healthy infants with adequate intake of human milk or infant formula, supplemental water is typically not needed in the first 6 months. Small amounts (up to 4 to 8 ounces per day) of plain, fluoridated drinking water can be given to infants with the introduction of complementary foods. Plain, fluoridated drinking water intake can slowly be increased after age 1 to meet hydration and fluoride needs.

Sugar-sweetened beverages (e.g., regular soda, juice drinks [not 100% fruit juice], sports drinks, and flavoured water with sugar) should not be given to children younger than age 2. Drinks labelled as fruit drinks or fruit-flavoured drinks are not the same as 100% fruit juice and contain added sugars.

These beverages displace nutrient-dense beverages and foods in the diet of young children. Infants and toddlers do not have room in their diets for the additional calories from added sugars found in these beverages. Also, sugar-sweetened beverage intake in infancy and early childhood may predispose children to consume more of these beverages later in life.

These nutrition programs are especially important for families with children who experience food insecurity and may struggle to access the foods needed to support a healthy dietary pattern.

Staying Fit while working from Home: A Smarter Approach