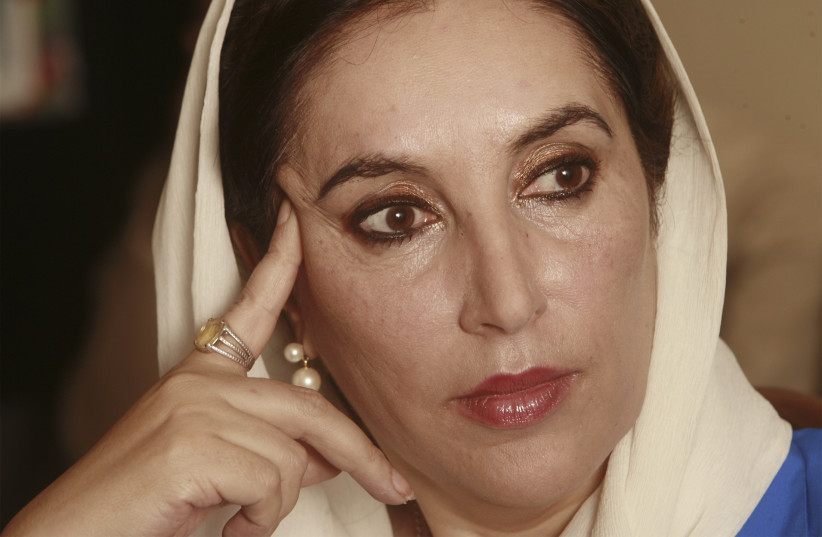 Who knew that a baby girl born in Karachi, on 21 June 1953 will set an example for the whole nation of Pakistan. She was the first female Prime Minister in the history of Pakistan.

Benazir Bhutto was the eldest daughter of Shaheed Zulfiqar Ali Bhutto and Nusrat Bhutto. She had three siblings, one sister, Sanam Bhutto, and two younger brothers, Murtaza Bhutto and Shahnawaz Bhutto. She was born with silver spoon in her mouth. She belongs to a political and landlord family. Her father, Zulfiqar Ali Bhutto was a barrister and great politician of Pakistan, who served as the fourth president of Pakistan (1971-1973) and also served as ninth Prime Minister of Pakistan (1973- 1977). 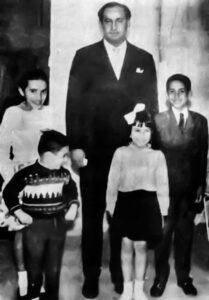 At the age of sixteen, in 1969, she went to the united states for higher studies, which is younger than normal, for an undergraduate degree from Radcliffe College, Harvard University. She passed her four years at Harvard University from 1969 to 1973. In 1973, She went to the United Kingdom and began studying for a second undergraduate degree, at Lady Margaret Hall, University of Oxford. After three years she received a second class degree, in philosophy, Politics, and Economics. 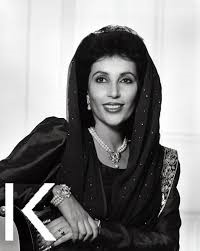 After completing her education Benazir returned to Pakistan in 1977 and was placed under house arrest after the government of her father was overthrown by a military coup led by General Muhammad Zia-ul-Haq. After one year, in 1979, Zia-ul-Haq became President of Pakistan, Zulfiqar Ali Bhutto was hanged after his conviction on charges of authorizing the murder of an opponent.

Family tragedies occurred in her family in the 1980s when Benazir’s brother Shahnawaz was killed in his apartment on the Riviera in 1985. His family insisted that he was given poison, but no charges were taken against a murderer. In 1996, another brother, Murtaza, died (when his sister was in power) in a gun battle with police in Karachi.

On 18 December 1987, Benazir was married to Asif Ali Zardari, a wealthy landowner. They had three children, one son named Bilawal Bhutto Zardari and two daughters Bakhhtawar and Aseefa. 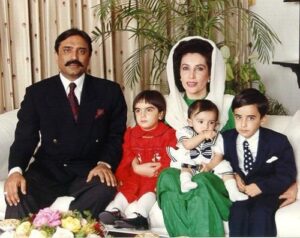 Benazir inherited the great politician from her father. She got the leadership of her father’s party, the Pakistan People’s Party, after the death of her father. She was detained for three years before being permitted to leave the country in 1984. When her brother died in 1985, she traveled to Pakistan for his burial, and again she was arrested for participating in anti-government rallies.

When she was released, she flew back to London, and at the end of the year, martial law was lifted in the country. Demonstration resumed against Zia and Benazir Bhutto returned to Pakistan in April 1986. The public gave her a remarkable response. She publically called for the resignation of Zia Ul Haq, whose government had executed her father.

Finally, free elections were held in 1988, then she became Prime Minister of Pakistan. At the age of 35, she was one of the youngest chief executives in the world, and she was the first woman to serve as a prime minister in Islamic countries. 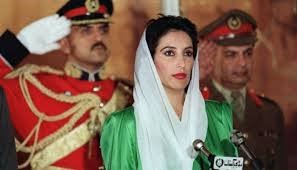 President Ghulam Ishaq Khan dismissed Benazir from office, after the first two years of her first term. She started an anti-corruption campaign, and she was re-elected as prime minister of Pakistan in 1993. While in power, she brought electricity to the countryside and also built schools all over the country.

She worked hard for the welfare of her country and looked forward to modernizing Pakistan. She made hunger, housing, and healthcare her top priorities. She also worked to uplift the lifestyle of the poor masses of the country.

In 1996, President Farooq Leghari dismissed Benazir Bhutto from office and dissolved the national assembly. Her re-election bid failed in 1997, and the next elected government, headed by Nawaz Sharif, was also overthrown by the military. Benazir’s husband, Asif Ali Zardari was imprisoned, and once again, she was forced to leave her homeland. Benazir was exiled and she along with her children lived in London for nine years, where she continued to advocate the restoration of democracy in Pakistan

In 2004, Asif Ali Zardari was released from prison and lived with his family in London. She faced death threats from radical Islamists and the hostility of government. In 2007, she returned to Pakistan with her family.

Although she was greeted by enthusiastic crowds, within hours of her arrival, her car was attacked by a suicide bomber. She survived in this first assassination attempt, but more than 100 people died in this attack.

Few weeks before the election, which was to be held in January 2008, she was leading a campaign rally in Rawalpindi, on 27 December 2007, a gunman fired at her car and then a suicide bomb exploded, which took the lives of more than 20 supporters of people’s party.

Benazir was rushed to the hospital but soon succumbed to injuries. After the death of Benazir Bhutto, rioting erupted all over the country. It was a great loss as Pakistan lost a great democratic leader, and the whole country plunged into deep grief. Every Pakistani felt as if the death has occurred in their own home. 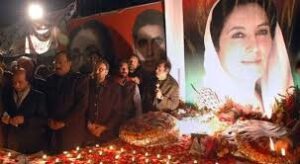 SET EXAMPLE FOR OTHER WOMEN

She struggled hard, she was imprisoned, and was exiled from the country and finally, she got success in her mission. She became the first Prime minister of Pakistan, and the first woman to rule the country all over the Muslim world. She set the example for the whole nation that woman is not less than man, and if one work hard and had faith in Allah, he or she could succeed.

Her efforts and struggles for democracy remain a lasting legacy that is deeply respected among her rivals. Her remarks about democracy are, “Democracy is the best revenge”. She was liked by Pakistanis, that after her assassination in Rawalpindi, several universities and public buildings were named in Pakistan in Benazir Bhutto’s name. Many women in Pakistan were greatly inspired by a great leader Shaheed Muhtarma Benazir Bhutto.

MAY HER SOUL REST IN PEACE!