2021 has arrived and it’s all about competition, the world is progressing at a rapid pace and to survive in this highly competitive environment one must be equipped with ample skills to face the ever-growing challenges survival offers, as Darwin says “Survival of the fittest”. Among all of them, Leadership is such a skill if one develops, one can not only enhance one’s survival chances but can also perform each task more efficiently.

But what leadership is and how can one develop the traits of a leader is something that needs to be understood in a nice step-by-step demeanor and this series of blogs is all about it, understanding what leadership is from the journeys of leaders themselves.

When people fall in abysmal pits of despair, when the task is too tired some too excruciating too strenuous, when heavy giant doors curb entering the castle of success, when the darkness of consistent failure saps the soul, then among people one decides not to quit, not to quit this time, one who gives hand to pull up people ascending the mountain of despair, one who believes in people and make people believe in him, one who initiates. That one is called a Leader and Jack Ma is certainly one of them. 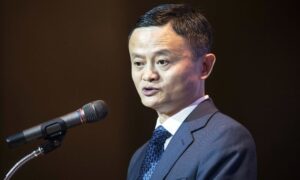 Jack Ma a phenomenal success figure really inspired me to write about him when I studied his journey which is more about failures than success. Jack Ma in the initial phases of his life, every time he put his hand in something, he faced failure. Life was never humble with him throughout his life he consistently faced failures after failures. Starting with his humble background he was born in china when communism was at its peak the country was subjected to havoc and chaos the poor were in miserable conditions and Jack was one of them. Lately when tourism started to begin in China Jack started as a guide who wants English lectures in charge of guiding American and English tourists.

He was quite weak in studies and could hardly pass through the initial stages of the education system and miserably failed in the exams of Primary School next year again and hardly passed in the next attempt the years later gave high school exams failed twice and hardly made it through in the third attempt, applied for renowned colleges but failed to get through the entrance test then next year got admission in a University and did his bachelors in English from there. He applied for 30 jobs at that time and got rejected from all of them, he told once that he applied for a job where 23 seats were vacant,24 people applied for them and 23 got the job except him. 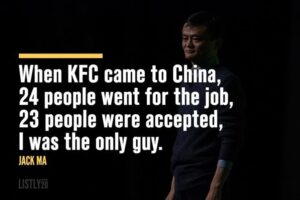 Later on, he went to America once and discovered that every kind of Beer is available in America except Chinese a country of more than 1 billion people who didn’t even have one brand of beer in the largest market of the world. This incident conceived an idea in his mind and he made a website along with his friends named “China Page” the website was going to introduce Chinese markets to the USA demographic through the internet.

But because of no funding and other resources, he had to soon turn off it but the best thing about it was that he didn’t give up. He joined as an English teacher at the university where he completed his bachelor’s degree. He became a teacher teaching English and like many other human beings might have thought that this is what he will have to do throughout his life.

The Twist in the tale:

Life was never easy for Jack, failing, failing and failing again had become like destiny for him. Everything he tried turned unsuccessful. Imagine Jack Ma quitting learning and trying again and again, could he had ever become such a successful entrepreneur with such mammoth success, Never.

In the meantime, he kept learning from people around him about different things related to e-commerce and never stopped thinking about his alien-looking idea and then after getting ample knowledge of e-commerce, 17 experienced full of energy people, and a leader’s brain, he started a new company. Alibaba was born. The organization started from his loft. At first, Alibaba didn’t have a single penny in speculation from outside financial specialists, yet they later raised $20 Million from SoftBank and another $5 Million from Goldman Sachs in 1999. 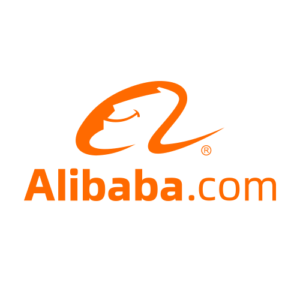 Building trust among the individuals of China that an online arrangement of installment and bundle moves is protected was the greatest test Jack Ma and Alibaba confronted, a test that Jack will cherish for his lifetime. Albeit faced numerous tribulations during its journey Alibaba under the leadership of Jack Ma confronted each challenge with vigor, including in 2003 when the company faced such a crisis that it was almost closed, although stumbling but never gave up and gradually progressing.

Having begun his first fruitful organization at 31 years old and even after never having composed a solitary line of code, Jack Ma runs one of the greatest E-trade networks on the planet. The organization proceeded to develop quickly, extending all over the world, rapidly outgrowing its China shell. Simply second to Walmart now as far as deals every year, Alibaba has become the E-business monster that Jack Ma imagined for it.

What to take from Ma’s Leadership?

Jack Ma’s success can be deemed almost a fairytale. An idealistic rag to riches story for a person born in the downtrodden belly of communist China with few opportunities knocking over his door. In the last 2 decades, only a handful of firms in Asia have managed to replicate the progress and success showed by Alibaba. This feat can largely be attributed to the efforts and leadership qualities of Mr. Jack Ma.

Indeed, it takes a rare person to accumulate a total net worth of over $20 billion while maintaining a sense of perspective, through a devoted work ethic. With his unparalleled leadership traits and qualities, Jack Ma is one of those rarities. Here’s what we should take from this blog and must inculcate in ourselves to follow the leadership pattern of Jack Ma.

Be the person you are, one of the things people noticed about his leadership is that he didn’t adopt that artificial approach of “being a leader” he encouraged his employees to be silly as he was, detach themselves from work when necessary. “Jack had the ability to bring together ordinary people to do extraordinary things,” says Porter Erisman, Former Alibaba Vice president.

Rivalry doesn’t need to be a terrible difficulty. Contenders are to be regarded and not to be disparaged. They don’t need to be foes as they are significant in the manner they permit you to survey your practices and to assess zones that need improvement or deficiencies. Jack Ma considers themselves to be companions he can gain from and regard them accordingly. 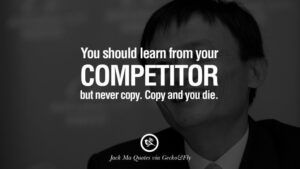 The Never say die attitude shown by Jack Ma is quite unparalleled. Failed in almost everything he tried but never gave up” ‘If you don’t give up, you still have a chance. Giving up is the greatest failure.”  Jack Ma. “Never give up. Today is hard, tomorrow will be worse, but the day after tomorrow will be sunshine” – Jack Ma. 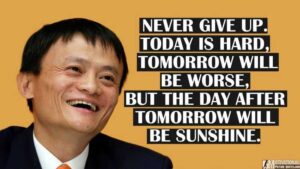 4. Do not dream big, dream bigger than big:

Success is all about dreaming big and by big, I mean really big. If your goals don’t appear as nightmares in your sleep then they are not big enough. Dreaming big is an asset that decides the extent of the success a person will get. 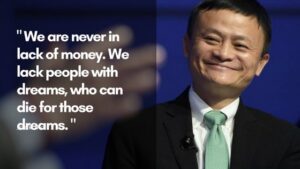 What he did right in the last was that he led his people right, he might not get the best marketing brain in the world but he certainly got the brain of a leader. He made the right decisions at the right time, he faced failures with a smile on his face, took risks took initiatives, The most important thing that I think he did was that he inculcated his traits and attributes in his workers he made them endure more and more he made them face difficulties, he taught them how not to give up, he taught them the skill of cooperation and communication and eventually he made a leader among each of his workers themselves.